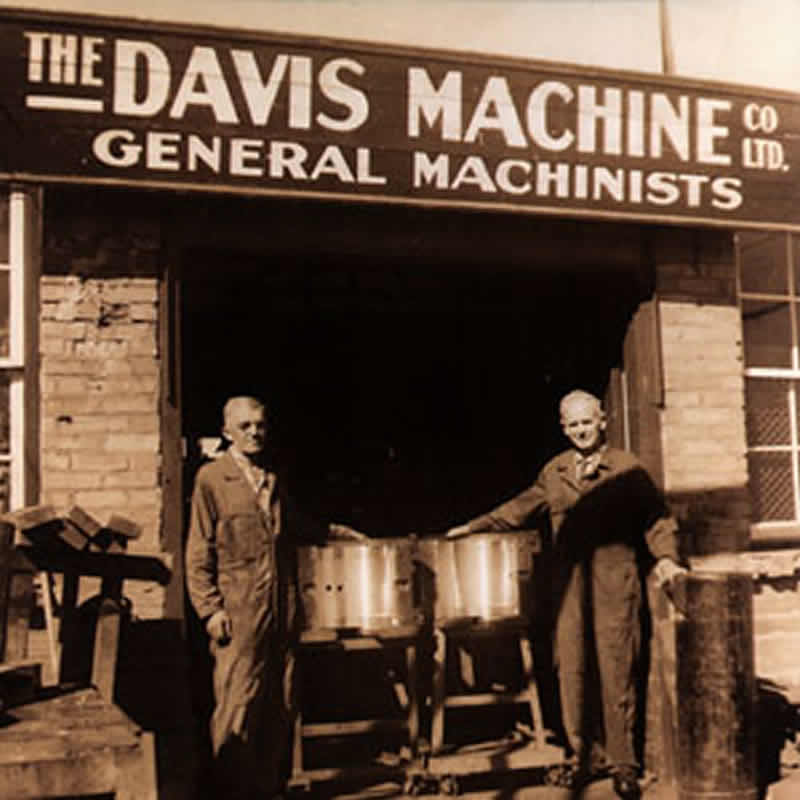 Founded in 1919, Davis Machine Co. is Saskatoon's oldest established machine shop. In placing that longevity into a historical context, a story was related to long-term employee Phil Hamm by the company founder, Bill Davis. It seems someone visiting the city approached Davis to fix a broken automobile axle. Davis complied and discovered later to his amazement that the owner of that automobile was none other than AI Capone, the infamous Mafia chief.

Not every day in the past years has brought that kind of excitement to Davis Machine Co. ... but the days have brought every kind of machining and welding work imaginable.

Founder Bill Davis opened Davis Machine Co. Shop in 1919 -first in a rented building on the comer of23rd and Idylwyld (then Avenue A) and a while later purchased two lots further South and had a building moved onto it. Davis ran the company until 1960 when partners Larry Woodward and Ian Tiessen took over.

In the spring of 1967 Davis Machine Co. moved to 46th Street and 1st A venue where it remains as part of an industrial community to this day. At that time however, the shop was a true pioneer; there were few other buildings so far North at the time.

The next big change came in 1989 when the opportunity camne up to purchase the shop. Four Davis Machine Co. employees, Jim Rhode, Phil Hamm, Larry Fast and Leigh Marner decided to pool their resources and purchase Davis Machine Co..

In 1997 Jim Rhode bought out his partners to become sole owner and president of Davis Machine.

Davis Machine Co.'s greatest asset is its highly skilled and professional work force. All employees have worked through a four-year apprentice program and most of them have been with the company for many years. The Davis Machine Co. journeymen will tum their hand to any job within the machining and welding field.

Plenty of customers remember having work done at Davis Machine Co. many years ago-hardly surprising considering its 95+ year history. We like to think it's our unparalleled reliability and performance that have kept our customers coming back year after year.

We are extremely proud to have been a part of Saskatoon's history and community for the past nine plus decades and we look forward to celebrating our I 00 year centenary in 2019.